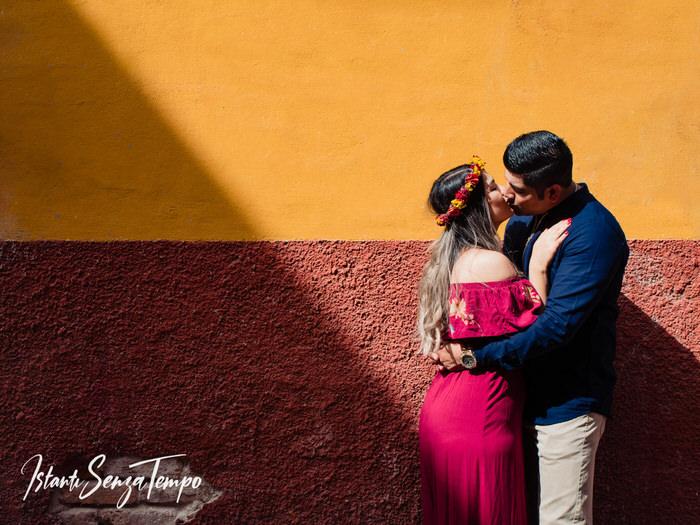 We at IstantiSenzaTempo are always super happy when we have a photographic and videographic service in a foreign Country. We are two travel lovers and traveling doing our dreaming job is the most we can desire!

The moment when Luis propose to Marcela at calle Aldama, the best street in the city.

This time we flew for an Engagement in Mexico, the Country of Mariachi’s music, spicy food, white beaches, Mayan pyramids and colors! And are exactly the colors that characterize the cities of San Miguel de Allende and Guanajuato. Both are very famous for destination weddings in Mexico, so they are the perfect frame for an Engagement shooting in Mexico!

In these colorful and fascinating places, Luis chose to propose himself to Marcela.
Luis and Marcela are two northern Mexico guys in love with these places in central Mexico full of life and traditions. And it was so nice!

Luis and Marcela chose IstantiSenzaTempo for capturing such a special moment for them with photo and video.
So we decided with Luis that the proposal would be even more nice if made in Calle Aldama, the most beautiful street in the city of San Miguel and one of the most beautiful in the world.
In fact, this street has not only the characteristic vibrant Mexican colors, but also the distinction of having in the background the Parish of San Miguel Arcangel a church of a great charm and with a structure that resemble a "wedding cake"!

San Miguel de Allende is so perfect in creating breathtaking images, it is no coincidence that it is a UNESCO heritage and it was also included in the list of Pueblos Mágicos a collection of the most suggestive and mystical places in Mexico.
We chose some corners and walls, playing with yellow and red contrasts, or with walls full of seasonal flowers up to take shoots in front of a wall with a huge cactus, that is certainly one of the symbols that most represent Mexico.

San Miguel de Allende and Guanajuato are two absolutely magnificent places to do an engagement service.
Engagement shootings are increasingly asked by couples and we are so happy about it. Being able to make photos or videos before the wedding allows us to tell a love story in a less formal way of a wedding and often in a more personalized way: we can decide with the couple the right set and often also the clothes to wear and other details that represent them but which also have the best result from a visual point of view. Also, spending a very good time together allows us to know better each other and to completely avoid the typical awkwardness that couples have in front of the lens: you can be sure that, after an engagement shooting session, couples are more confy to our presence at the wedding day. It is for these main reasons that we advise you to don’t underestimate this kind of photo/video service.

The video begins with Marcela's close-up with her eyes closed, on a pink background (which recalls femininity) with a light wind that moves her hair. Then, in order to present the place where we are, there is a rapid reference of Mexican symbols and images with an unmistakable mariachi music as a soundtrack. The video continues with the introduction of Luis.
Guanajuato and San Miguel de Allende description continues with games of shadows and lights. Two birds fly together while Marcela and Luis walk alone through the streets of the city. Then you can find them together but far, with both looking to the camera. After that the approach process begins, Luis and Marcela walk together in the same street, but the bodies of the two lovers are still distant, Luis following Marcela.
We return to the same shot as before but this time Luis and Marcela look in the direction of the other one and finally join together and continue their journey to each other side, for millions of days.
Marcela opens her eyes. Is it a dream or reality?

So here we told a love story, a dream come true, in one of the places that most represent Mexico.
Did you like the video? So why don’t you think to get married in San Miguel de Allende?

IstantiSenzaTempo|We take care of Your Memories

A Proposal in Rome at Colosseum

A Wedding in an italian castle

How to plan a Wedding on the Beach

10 Tips for Planning a Wedding in the Woods

A wedding in 20 pictures

The story of a video

If you not change browser settings, you agree to it. Learn more